… and celebrating the rich Mexican culture for Hispanic Heritage Month

Mexican culture is a staple in most metropolitan cities around the world. From the vibrant colors that come from the region, to the culinary influence of the North to the South, the power of Mexico is visible in global fashion, food, film, wine and spirits, and design. This month, as we celebrate Hispanic Heritage Month and culture, Mexico is at the forefront of our minds. We want to shine a light on Mexican culture, and we are going to do that by highlighting a few select regions and recipes that extend throughout the Mexican coast.

Sinaloa, a state in Mexico, is well known for its agricultural production and is referred to as the “Breadbasket of Mexico”. Over three quarters of its landmass is used for agriculture, and it is the leading producer of rice and vegetables in the country. Seafood is abundant along the 640 km coastline, and the primary cities in the state are Mazatlán, Culiacán, and Los Mochis.

One of the famous dishes from Sinaloa is Aquachile, which is shrimp marinated in lime and chile, served with cucumbers, onion, and cilantro. Culiacán, known for its culture, luxuries, and celebrations, is also home to Las Riberas Park. It is known for its dancing fountains and religious temples, such as its Basilica Cathedral, the sanctuary, and the Lomita. 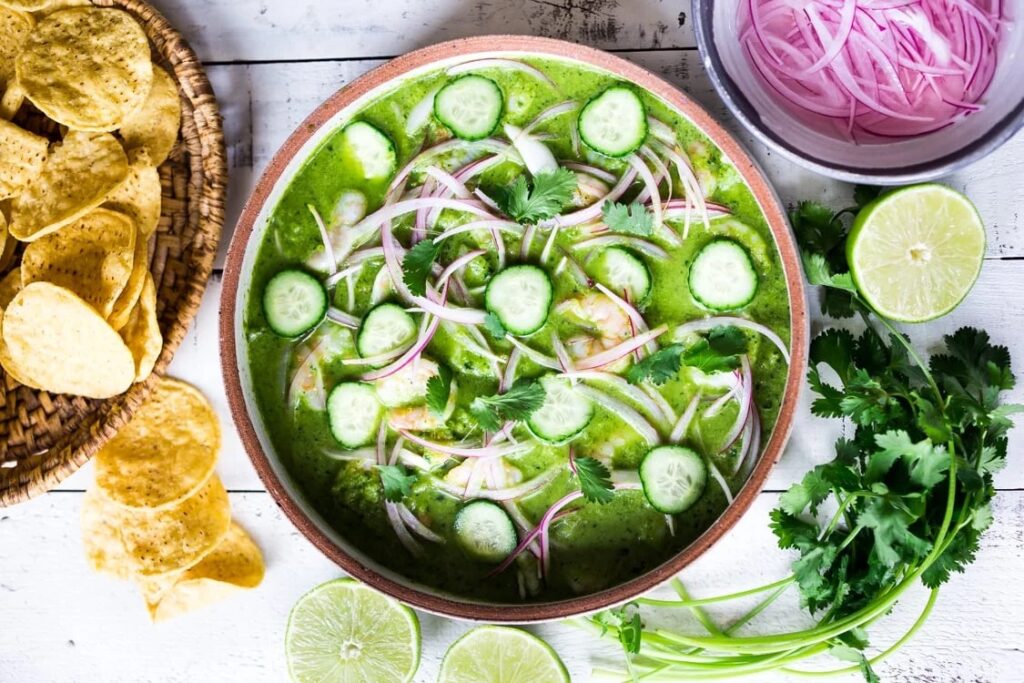 FOR THE RED ONION

FOR THE AGUACHILE MARINADE

The Riviera Nayarit region is located between the Pacific Ocean and the Sierra Madre Mountains. It is a multicultural, multiethnic, and multilingual state, with traditions from the many cultures that make it unique. There are four indigenous tribes in Riviera Nayarit: the Huicholes, Coras, Tepehuanos, and Mexicaneros.

The Huicholes are a particularly fascinating tribe, known for their colorful dress, embroidered manta cloth clothing, and plumed hats. They are also known for their elaborate bracelets, rings, and necklaces made of crystal beads, which also shape their vision of the universe. The Huicholes call themselves the “Children of the Sun,” and are obligated to visit the five sacred places of their faith in their lifetimes. One of these places is the Tatei Amara, or “White Rock,” located in the historic port of San Blas.

The Coras, who are renowned for their ceramics, live mainly in the municipality of Nayar, in the western part of the state. Their dialect is related to that of the Huicholes.

The Tepehuanos inhabit small areas in the municipality of Huajicori, and among the artistic products created by them are yarn knapsacks, hats, clay pots, and equipales (traditional barrel chairs with a woven palm base and leather seat and back).

The Mexicaneros are often dedicated to weaving reed baskets, bins, and chiquihuites (small containers with lids), as well as creating wood art pieces, ixtle nets made of maguey fibers, and yarn knapsacks.

Banderas Bay, one of the largest and most beautiful tropical bays in the world, is also home to Nayarit. Every winter, humpback whales arrive at Banderas Bay to give birth, and visitors and locals witness their magnificent breaches, jumps, and water spouts, along with glimpses of their newborns.

The capital of the Mexican state of Colima is Colima City. It is located near the central Pacific coast, in a valley south of Colima Volcano. The main square, Jardín Libertad, features a 19th-century Belgian kiosk and Portal Medellín, a grand building with a row of arches. The Catedral Basílica Menor de Colima has a neoclassical facade. Next to the cathedral is the city hall and government building, Palacio de Gobierno.

Colima’s main crops are the Mexican lemon, melons, mangoes, papaya, watermelon, yellow seedless watermelons and bananas. Other crops include corn, sugar cane, jalapeno chilies, cherry tomatoes and cucumbers. “Colima offers you, from the coast to the mountains, a range of delicious dishes that include products and typical recipes from the area where they are cooked. Undoubtedly, Colima is characterized by its delicious traditional dishes, however, it also offers innovative and varied gastronomic proposals ranging from Mexican to international cuisine located in the metropolitan area of the capital.” (VisitMexico.com) According to Lonely Planet, Oaxaca is “A cultural colossus fit to rival anywhere in Latin America for history, gastronomy and colorful manifestations of indigenous culture. [Oaxaca] is a complex but intensely attractive city whose majestic churches and refined plazas have deservedly earned it a Unesco World Heritage badge. Lovers of culture come here to indulge in the Mexico of Zapotec and colonial legend.” The Zapotec people are indigenous to southern Mexico and North America in the Mesoamerican region. They have been the dominant group in the Valley of Oaxaca.

That said, Oaxaca is also the largest producer of mezcal! It is the principal mezcal producer, and reflected more than 90% of production in 2020. What is mezcal? It’s tequila’s smoking hot older sibling. Mezcal is made from 100% maguey or agave (sometimes up to 40 different agave varietals), obtained by distillation of fermented juices with spontaneous or cultivated microorganisms, extracted from mature heads of maguey or cooked agaves, harvested in the territory covered by the DOM (Denomination of Origin). In the last 10 years, official production has increased, from less than 1 million liters in 2011 to almost 8 million liters today. It’s gain in popularity only continues to grow, and it is because the unique flavor profiles of mezcal hit sensual, smokey notes no other spirit can rival. 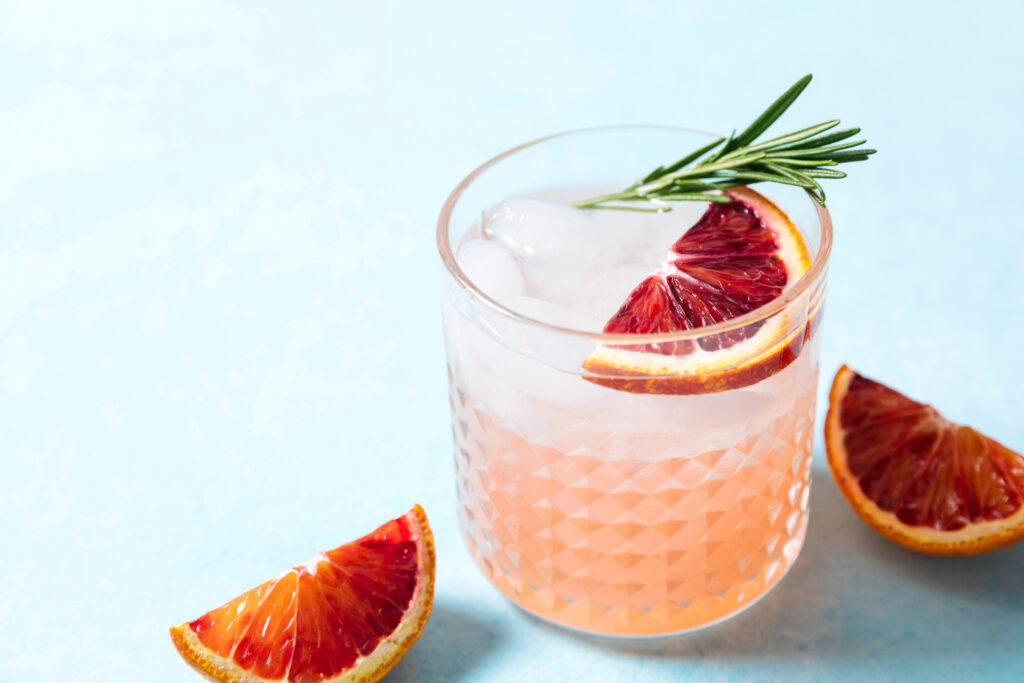 For the Jalapeño Simple Syrup

Tulum, a city in southern Mexico, was built in the 1300s and is one of the few Mayan cities that still stands. It is located 130 km south of Cancun. Tulum was built during what is known as the Mayan post-classic period. As well as being the only Mayan city built on a coast, Tulum was one of the few protected by a wall. Located on the gorgeous Mexican coast, the wall is seven meters thick and varies in height between three and five meters. It is unknown why a wall was built around the city, but it is speculated that it was used to protect the city from invaders and is is also said that it housed only priests and nobility within the walls, while peasants were kept on the outside.

The city can be entered through one of five doorways that lead to a field of rolling hills, black and grey stone outcroppings, and a sun-drenched landscape that will leave you in awe. Tulum is a beautiful town located on the Caribbean coastline of Mexico’s Yucatán Peninsula. It is known for its white sandy beaches and well-preserved Mayan ruins. The main cite is a large stone structure called El Castillo (castle), perched on a rocky cliff above the beautiful beach and turquoise sea. Travelers come from near and far to see the incredible mangroves and cenotes (natural limestone sinkholes), dive the cavernous ocean seascapes and swim with protected sea turtles. 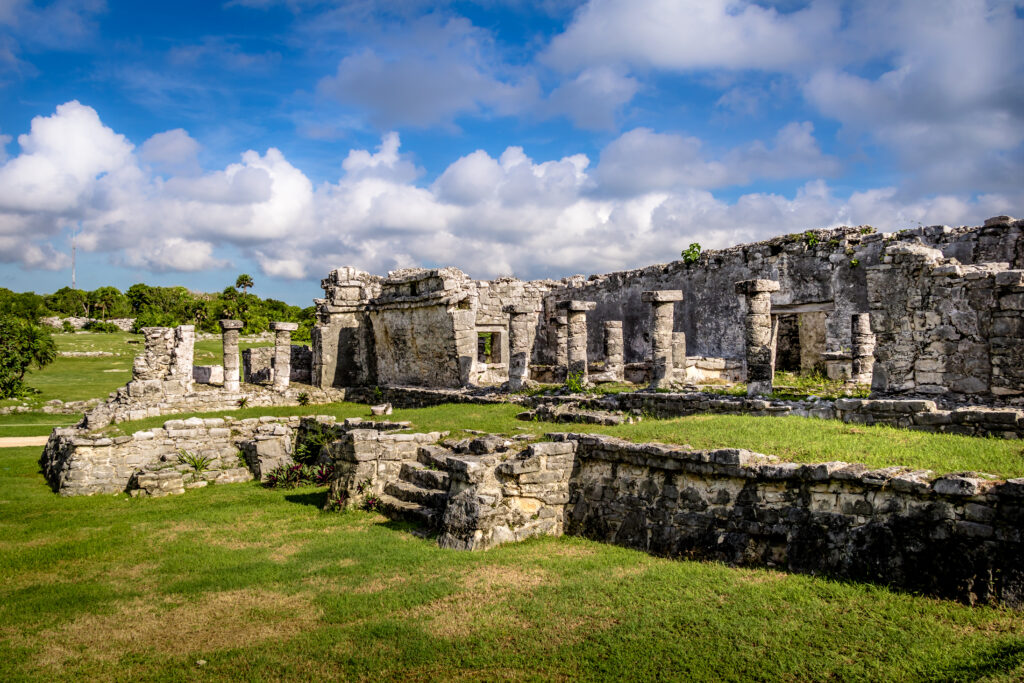 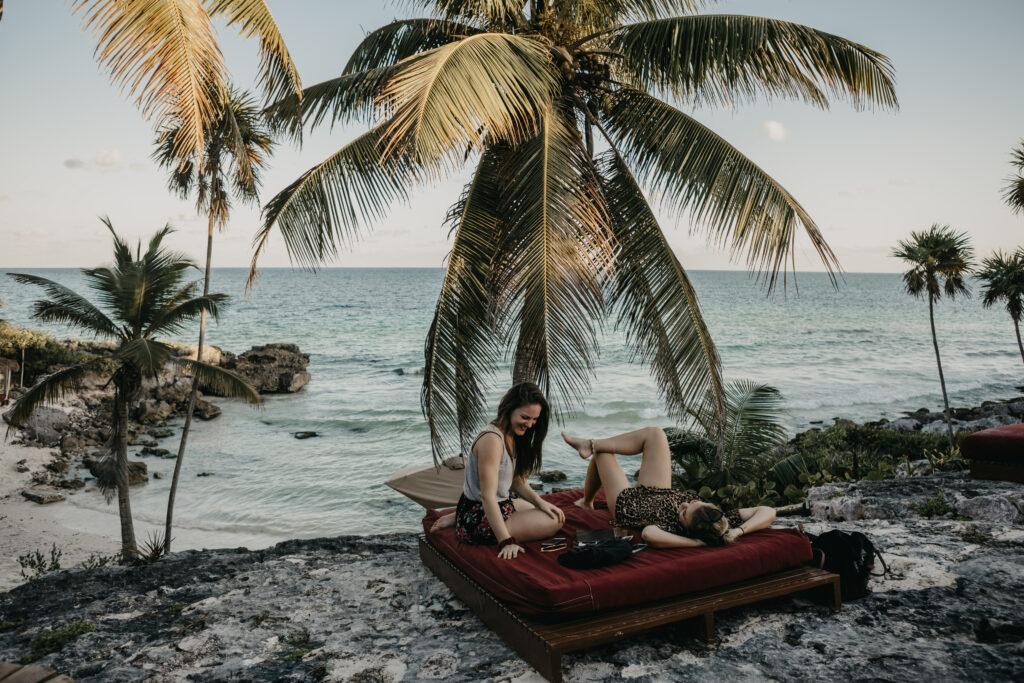 For the Salsa para Codzitos 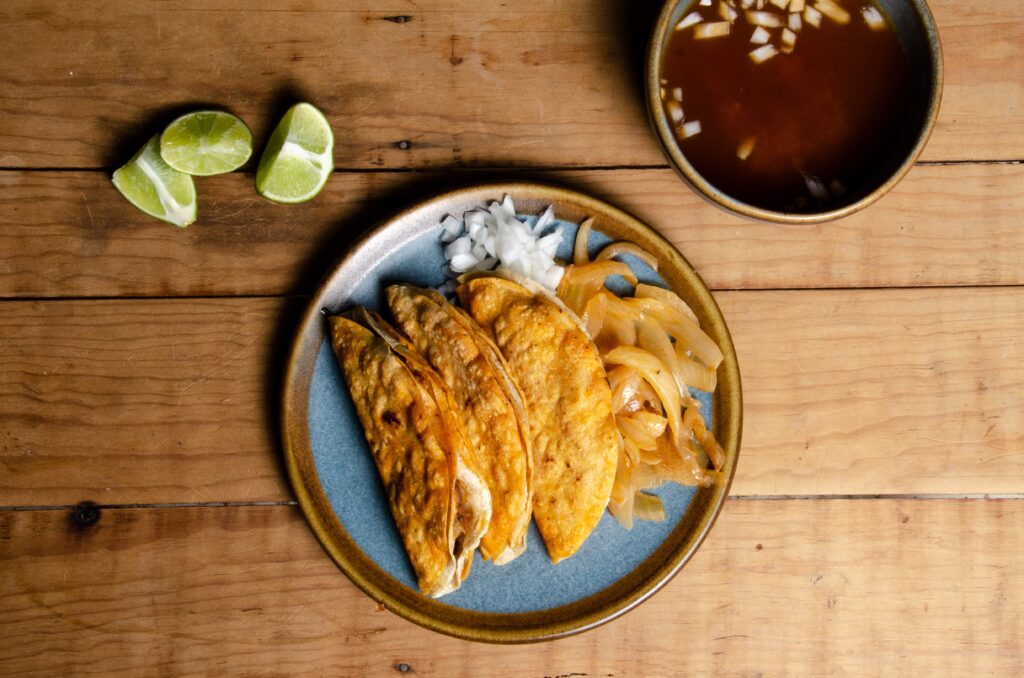 LOS ANGELES, CA – Sometimes you need an outfit to take you through your hectic day straight into your fabulous night meeting your gals for drinks. Fashion Stylist, Ali Levine shows us a great way to do this with this stylish #romper by Haute Hippie. A romper is a comfy piece that allows you to run all the errands you have during your busy day while still looking like the fashionista that you are.