Growing up in Los Angeles, the one thing you learn to accept is that very few things stay the same. You’re hard pressed to find a venue that has been there for decades upon decades – at least the way you remember it. However in Los Angeles, there is a wonderful movement to restore the once glistening city rich in venues, bars, restaurants, and entertainment. That said, my favorite period in time is the 1920s-1940s. The style, the design, the mentality, the music, the art – all of it makes perfect sense to me. And once upon a time those old Hollywood clubs not only had great music and cocktails, they had entertainment. REAL entertainment. Thankfully I continue to discover more places they pay a proud homage to the days past. One such place is Bardot Hollywood. Beautiful and under-the-radar, Bardot is a venue that invites you into another time. Tonight, however is even more spectacular than that.

“David Minkin’s show is filled with original, breathtaking magic and delivered in an elegant and artful style. The show is the longest running one-man magic show in Los Angeles, with five years of rave reviews.

It is interactive, involving various members of the audience, and at times, borrowed objects that are seen to do impossible things.

In 2007, David’s close-up magic won First Place from the world’s largest organization of magicians, with over 13,000 members in 73 countries.

Now, he performs his show just inches from you, as he welcomes you into a unique world of infinite possibilities.

The show will forever change your definition of magic.” 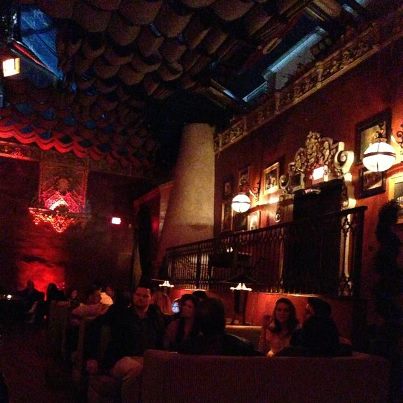 The night begins as I enter through a covered entry with just one man, vintage lamps adorning the brick wall, and a clipboard resting on a black cocktail table. I feel like I need Bugsy with me. I like it. I walk up the ascending stairs and turn to my right, to my right again and soon enter into a room roaming in tones of deep reds with decorated corners, booths tufted with velvet, worn time, and elegance and I am shown to my table. Luckily I am sat with 4 others who make this evening even more unforgettable. Heather, our MC for the evening takes us through the wine list of reds and whites. As we happily sip, David Minkin comes to our table. David Minkin is the reason we’re all here tonight. He is a truly gifted magician with a palate for wine and so, as a natural consequence, his show embodies a very tried and true sense of all things magical. He makes his way around the room being sure to say hello to everyone (this is why he is so good at what he does – he genuinely cares). Before the last wines are poured, David brings over two of his Reserve wines but it’s one that really takes me over: LXV. The smoothness, the bold rupture of flavor, the sensual blend of berry and coffee – it is perfection. Soon after the wine is poured the announcement is made that it’s time to go into the next room for the primary attraction: Mr. David Minkin.

The room fills with bodies all happily fed and palates entices by 4 different kinds of wine. Four of the following are chosen on any given night:

David enters the room and situates himself no more than 2 feet away from the audience. He is up close and personal and without a beat, greets us all in his relaxed and warm way and voila! The magic begins. Literally. It muse be said – again – that I’m a cynic and an overthinker. I pride myself on wanting to know how everything works. However, I do enjoy a healthy dose of intrigue followed by unexplainable mystery. I mean, I AM a writer after all. That said, when it comes to magic I just think it’s clever sleight of hand – but David is going to prove me wrong. Saying precisely that, ‘most people think this is just sleight of hand, I’m going to roll up my sleeves so there’s nothing in the way”. And he does. And I’m now paying close attention. David begins with cards. I’m still not a believer though I am incredibly impressed. And then he asks for all the cynics to raise their hands. Mine goes up almost involuntarily as do a very shy 4 or 5 others. He chooses me. He asks me to think of a card. I think of the 7 of clubs. Why? No idea. He pauses for a moment after focusing his attentions on me and then says, “You don’t know anyone by the name of Andy, do you? That name just keeps popping up.” I say, “No” – or rather shake my head because in my mind I’m about to stump him. And then he says, “So I give all of my cards a name.” And he proceeds to unload the deck of cards on to the table where every card has a name on the backside of it: John, Mike, etc. And then he comes to a card that says: ANDY. Guess what card it was. Yep. Seven of clubs. Damnit!  And the night goes on and I continue to shed my armor of disbelief. The way David produces magic is not in some overdramatic fashion. It’s relaxed as if you’re sitting with a friend who just wants to show you something really cool. You fall in love with his approach. 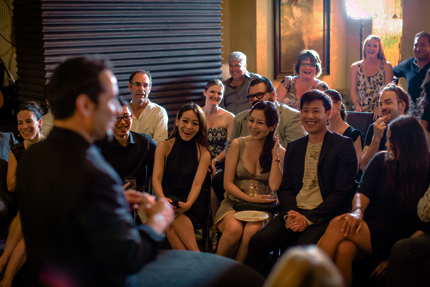 That evening, a bunch of media and friends of David’s went to dinner at Delphine’s Hollywood located inside the W Hotel off of Sunset. We sit down and they turn to me to order. I immediately order brussel sprouts, burgers, and tuna tartare. It sounds simply but the flavors are worth blending. As we’re sitting at the table, David must have gotten the sense that I still didn’t totally believe – so he asks me if he can borrow a ring on my finger. I have a stack of gold bands from China. They are thin and perfectly circled. I give him one. He rests it on his hand, arranges a few things on the table, and in seconds my ring is now levitating above his hand! That’s it! I believe! Sure it took this random act of spontaneous magic but now I know that David is the real deal. The show he performs at Bardot is exquisite. Not only are you transported to a time when Hollywood was pure bliss but you get to be a part of something truly authentic: David Minkin’s magic.

The moral of the story: be cynical but then be prepared to have your mind blown! That’s David. Oh, and he can create raindrops – water pouring from hands without any sleight of hand. Really.

Thanks to David Minkin for suspending disbelief and giving me a reason to give in to my whims of utilizing imagination and indulging in pure awe. You can purchase tickets to any of David’s performances by visiting: MAGIC & WINE

David also was a guest on my Radio Show. You can listen and watch it live here: A Taste of Dawn RADIO – Episode 3 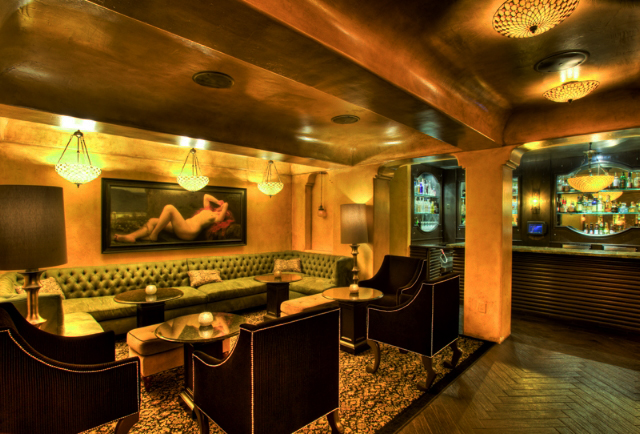