The saying “art is subjective” comes from a long list of creatives who realized the moment their work made its way out of their imagination and into something tangible, it was subject to a translation outside of their own. Leo Tolstoy said, “Art is the uniting of the subjective with the objective, of nature with reason, of the unconscious with the conscious, and therefore, art is the highest means of knowledge.”

That can be exhibited in a variety of mediums, but it resonates when we talk about surrealism. Surrealist Kelly Tunstall is an internationally known artist who often collaborates and shows with her husband, fellow artist Ferris Plock. Together they share unique artistic perspectives. Tunstall’s utopian joy and inquisitive nature oozes onto whatever medium she’s painting on— usually canvas or wood—enchanting those who view it. Her imagination was fueled at the age of three by reading books and watching films. Her childhood book repertoire included Brothers Grimm, Hans Christian Anderson, the Pippi Longstocking series, and Greek mythology.

I liked folk stories from all over the world,” Tunstall says.

“I watched a lot of Disney, and loved Gorey’s opening sequence for Mystery! I also loved Muppet Show as a kid, and then a lot of music videos and Monty Python in my teens.” 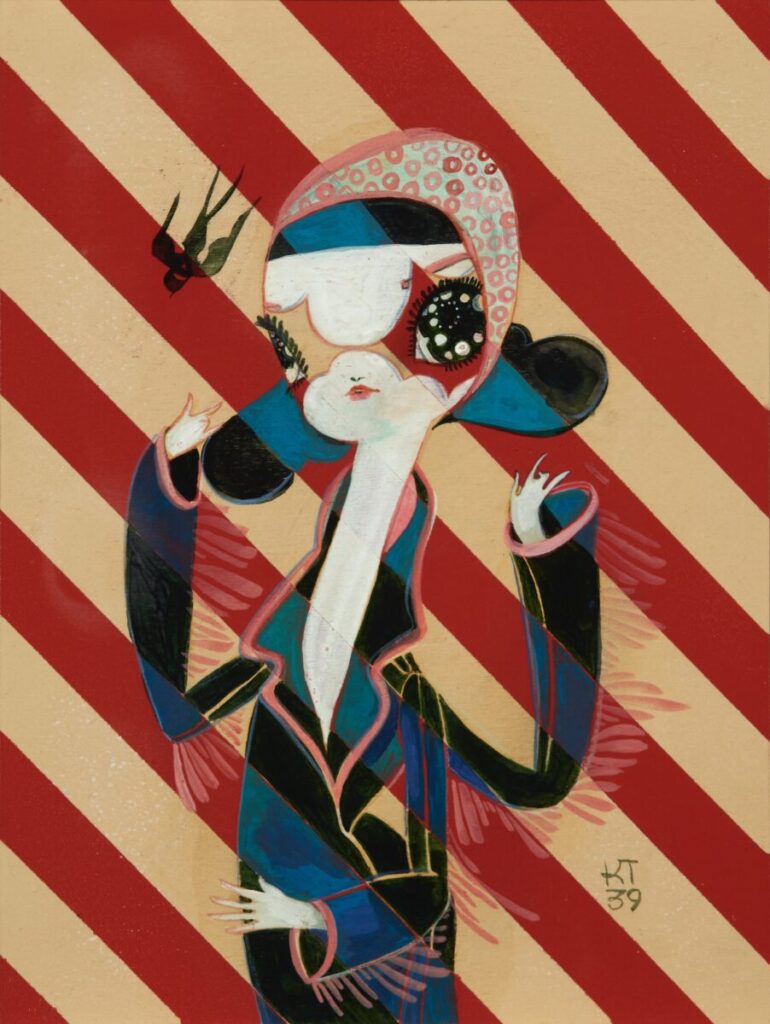 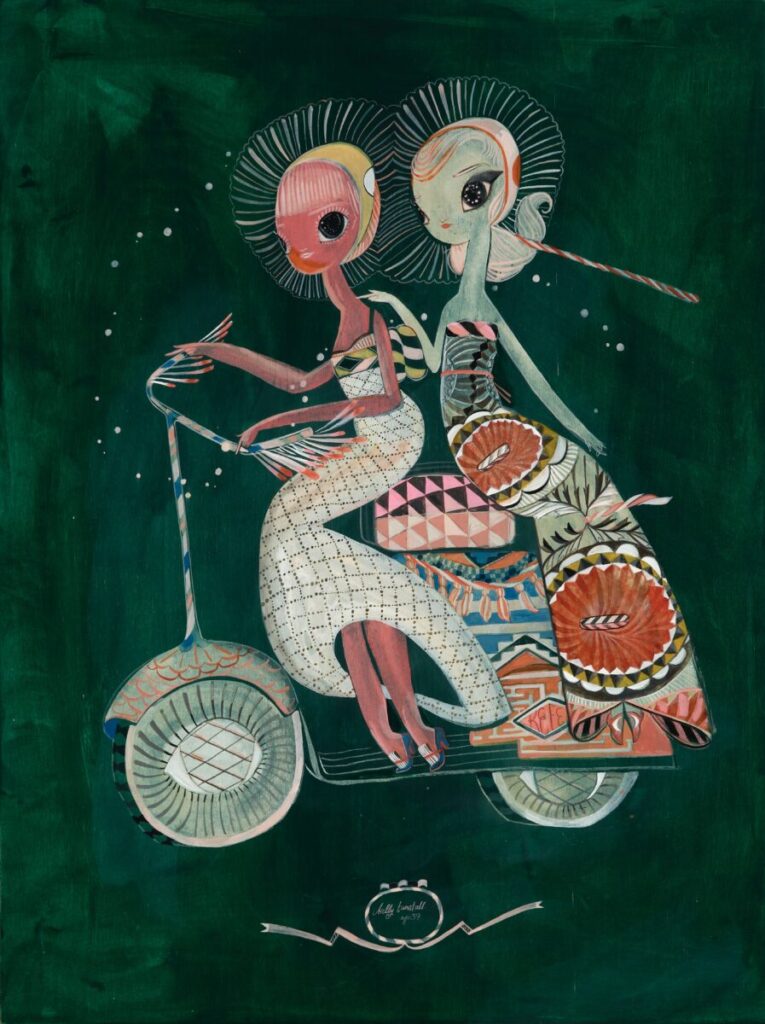 While she can’t pinpoint the moment she first picked up a paintbrush, she does remember drawing at a young age.

“I do remember having sketchbooks as long as I can remember. Some had a lot of folding pages.” Tunstall spent time in museums and while they fed a love of art, it is life in its natural form that has been a plentiful source of inspiration for her. “I grew up going to the great flea markets of Europe and antiquing with my parents. It’s the museum of the world, and you learn so much about any society by seeing what it discards or holds sacred. It’s a study in anthropology, and I still find this one my most inspirational ways to think when I get stuck,” she says. “I also encountered a lot of visual information and graphic design, industrial design, vernacular design, the folk arts, fashion, and textiles this way. It’s a way of reading.”

For this old soul with a clear vision, art quickly became her chosen form of expression by age 11. “I dressed in white and walked through a little bamboo forest in the yard as a transition,” she says. “I think it was something about realizing that I could really make the things that existed in my head and that I didn’t need to draw from nature or things around me. That was the big power play.” Her work has become a culmination of imagination and nature. 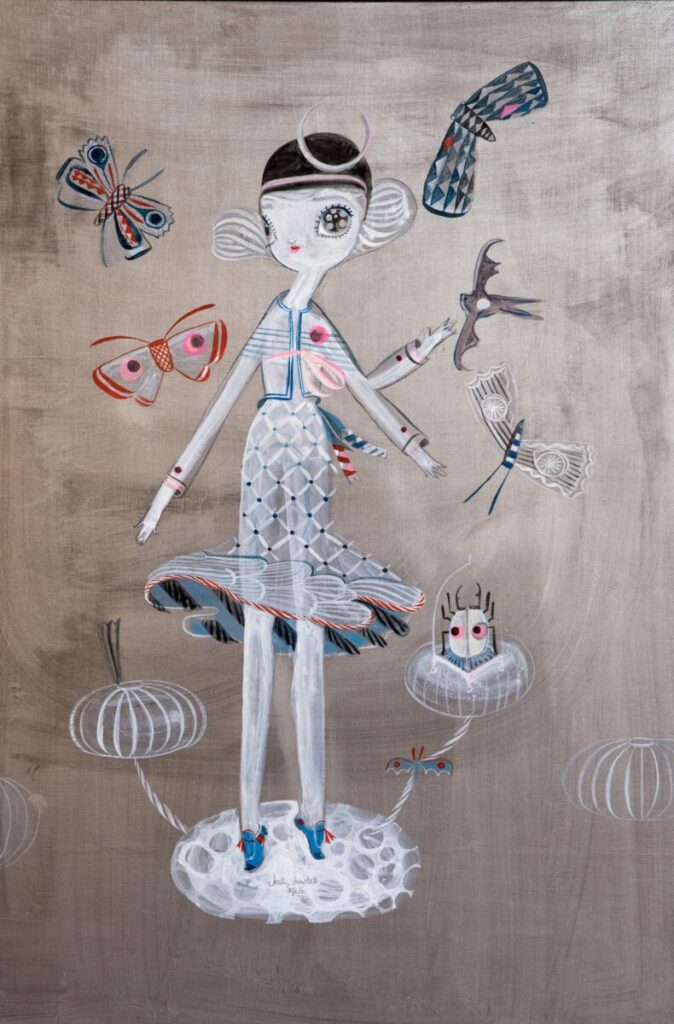 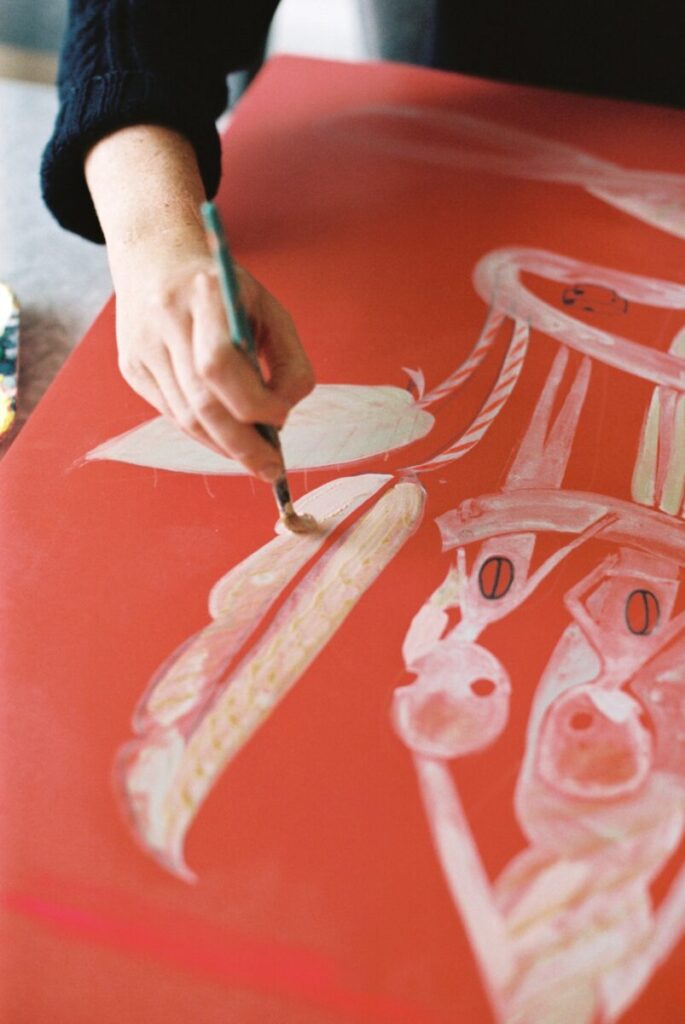 Her art pieces thrust their entrancing visual stories into view, creating a world where magic, emotion, and the fantastical come together to frolic.  “I start big with layers and color, and refine smaller and more detailed until it’s done,” says Tunstall.

Process and story are two different things for me. The concept is the frame-work. I catch a lot of the story as it comes to me, as the piece develops or unfolds.”

If the finished piece isn’t to her liking, she reworks or covers things with gold leaf until it feels right. Having grown up in Portland, Oregon; Tacoma, Washington; and Kaiserslautern, Germany, she was exposed to culture, nature, and colorful landscapes that influence her inner world.

“I’m very open-minded, but I’m always watching, always seeing, always looking. That never turns off, which is a blessing and a curse,” she says, “I’m good at finding beauty or it finding me, but that doesn’t happen unless I’m open to it. Art feels like some sacred translation of the world transformed into these smaller things that reflect a facet of truth. It’s always been around and always will be.”

Tunstall submits herself to this experience throughout her process, including when deciding which galleries and spaces will exhibit her work. “I always look for the story. I let spaces speak to me,” she says. “I look for a big picture when working on a show, take the temperature of the area, of its history, and try to work within that context. Our shows are very temporal and usually have some social commentary in them, if you’re looking, but it’s not always on the surface.” 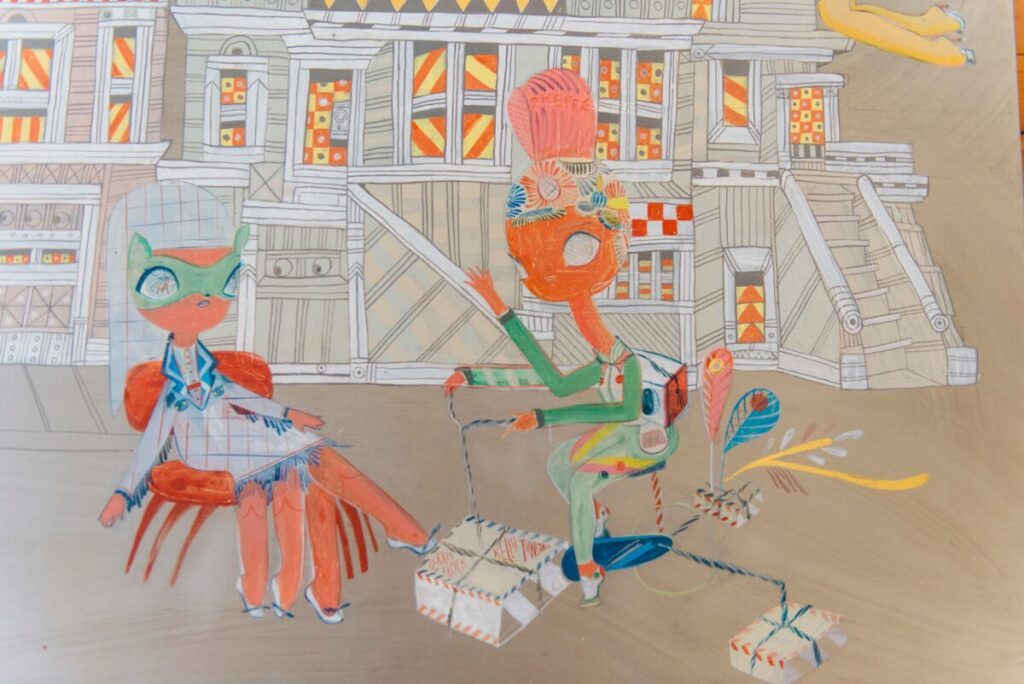 Tunstall is also mother and a wife, and though she has to search for pockets of time to create between family time, she values the opportunity to do it all. “The greatest luxury has been spending so much time with our kids while they are young, even when getting the time I need feels like a fight,” she says. A superwoman in her own right, she is the kind of artist and woman you want to sit down with to talk about kids, life, travel, humanity, and art and sort through her devotion to putting empathy at the forefront.

Tunstall and partner, Plock often create together, and their most recent project launches March 20th with Artists for ERA (Equal Rights Amendment), a movement for gender equality. The fundraiser will feature multiple artists, but Tunstall and Plock are donating 100% of the proceeds to #Artists4ERA. They will be selling an array of prints.

While recent and upcoming exhibitions span the globe, from Portland to New York to Tokyo and beyond, she and Plock have an onslaught of projects in the making and those brought to life during the pandemic, including an installation at Fogfair,  a16 San Francisco, Kefe Inc., a bottle design collaboration with MOSSIK Cellars, and Bulleit Bourbon. With clients and fans who include fashionistas, rock stars, foodies, and technologists, it’s clear that the artistic breadth of her work is absent of confinement. 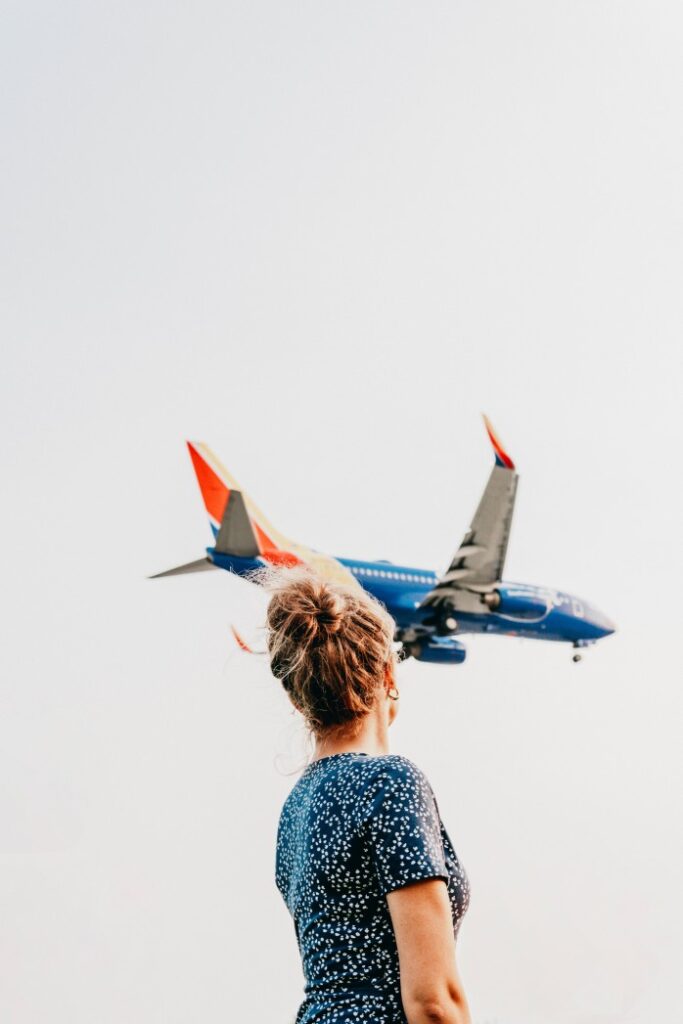 What artist would you most want to create alongside? Where in the world would you want to meet them?

Is there a color you are currently drawn to?

I’m using purple, probably for the first time. It’s a color that never spoke to me, but has just started to.

What makes you happiest when not making art?

What shows do you watch to escape?

Well-shot historical dramas with a lot of costumes. I also love Fellini films. I have the new Criterion Collection app, so I can watch all the cool old stuff.

“We Got Lucky” is a play about two best friends, Brad and Aaron, who live the bachelor lifestyle in Los Angeles. Aaron, played by Matthew Gilliam, is an unapologetic womanizer and alcoholic, who has a tremendous fear of commitment; in fact, the only thing he is committed to is his friendship with Brad. Aaron is boisterous and crass at times, but this works extremely well because it is his overt carelessness that gives him his “charm.”