Film is self expression, art is the silent voice within, and LA is a place where we can dwell in it all without apology.

While some have braved travel again, here at ATOD we’re avoiding Omnicron like it’s an evil Transformer. Instead we’ve been mastering the art of the California staycation and doing so with design and the creative swell in mind. As the stress of last year gets the promise of a fresh start lingering on the horizon, we wanted to enjoy another getaway and this time we headed back to Beverly Hills trotting straight to the SLS Hotel for two luxurious nights away, a little museum going, and a reintroduction to local cuisine.

Los Angeles is home to some of the most extraordinary museums in the world, and now the City of Angels has earned bragging rights as having the first ever museum of film and cinema, the Academy Museum. Created by the Academy of Motion Pictures, Arts and Sciences, the Academy Museum is a sweltering fixture of Hollywood cinema  that will immerse guests into the very essence of filmmaking.

From the blueprint of a screenplay to the intricacies of editing, sound mixing, set design, wardrobe, makeup and special effects, the art department, acting, directing, producing, and the sheer undeniable magic that the world of film is wholly responsible for, this museum is unlike any other. Paying tribute to those behind the scenes and in front of the camera, the museum is a historic walk through the birth of film, the power of story, and the fantastical elements of the visual arts.

One of my favorite rooms is the Spike Lee room. Consisting of Lee’s films, including documentaries that showcase the social and racial injustices plaguing this nation (and much of the world) the story told is one of love, transparency, racism, power, and the fight to overcome division and oppression. Like all of his work, the connection to the fabric woven by his films and documentaries to making powerful statements sound loudly and prophetically. The current exhibitions featuring the animation of  Hayao Mizayaki, the masterful installation of Pedro Almodóvar’s films, and the video collection uncovering the possibilities unleashed by the introduction of the steadi-cam are immersive. Mizayaki’s exhibition is like being thrust into a playground of his imagination with bright colors, dreamy art installations and of course his prophetic quotes that seem to transcend time and limitation.

For anyone who has ever watched any one of Almodóvar’s films, you know his understanding of female characters is unlike any other male filmmaker. Raised by women, his films unleash the strength and ferocity of women in a way that makes them heroines and villains – unraveling the beauty and complexities of who we are with grace and grit. His ability to story tell is raw and unfettered, poetic and visually profound. As for the steadi-cam reel, this is a glimpse into just how powerful this one invention has been. The steadi-cam was invented by Garrett Brown introduced in 1975 and mechanically isolates the camera from the operator’s movement, allowing for a smooth shot, even when the operator moves over an irregular surface. This invention opened a door for cinematographers to have far more control, and an individualized and stylized approach to capturing what was happening on camera.

Explore the museum, enjoy seeing Dorothy’s ruby red slippers, Star Wars droids, celebrate women in film, and welcome the lens of diversity that is essential and paramount to the future of film. 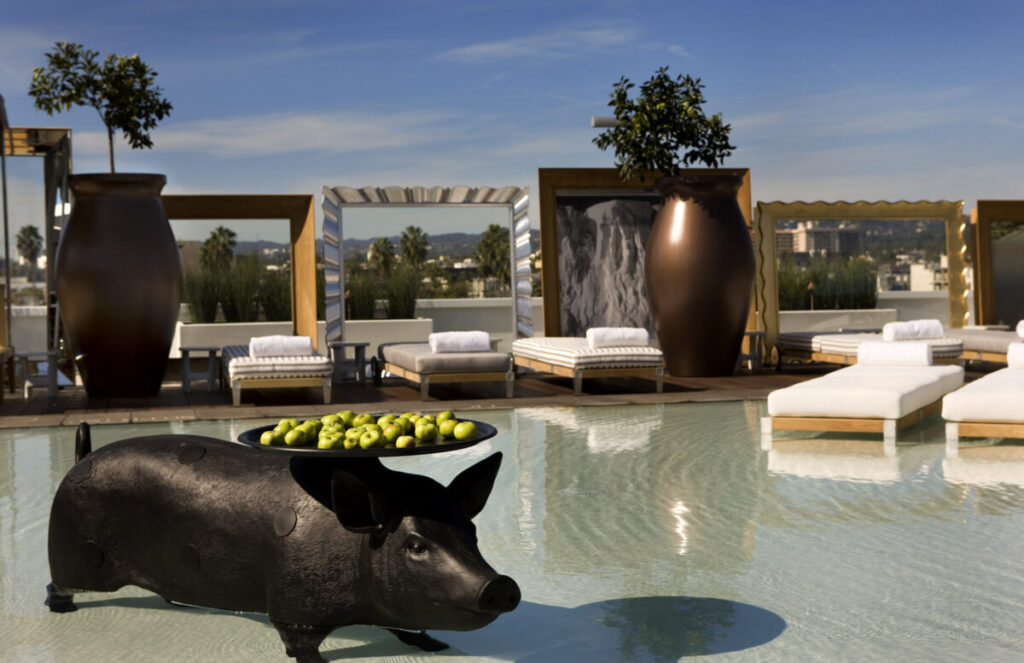 For those of us who have spent our entire lives in Los Angeles, the SLS is a fixture of prominence and bougie. That is why this year, we treated ourselves to two nights at this iconic LA fixture. Your experience begins the moment you pull into the driveway and walk the red carpet through the glass doors and into the lobby. The property offers rich tones and textures of deep, dark colors and one thing you’ll notice is the abundance of mirrors. Being surrounded in mirrors is one of the things that sets this hotel apart, but not for the reasons you’d assume. The theme at the hotel is not vanity but rather introspection and intentional self-reflection. With a refreshed interior, the rooms, the furnishings, lighting, rooftop pool and bar, and messages of thoughtfulness spread throughout the property, SLS Beverly Hills lives up to its reputation as one of the hottest places to stay in LA. And it’s not because of celebrity sightings.

One of the more noteworthy aspects of the hotel is that while it is centrally located in the heart of Beverly Hills and a short jaunt away from West Hollywood, the level of hospitality is uncompromising. From the front desk to the bartenders, everyone has a way of making you feel welcome. The rooms are modern and spacious, and the beds are beyond comfortable (this matters and isn’t always the case at high-level hotels, unfortunately), and the food and beverage program is top notch. I stayed in a Balcony Suite and it was spacious, beautifully decorated, and the theme of mirrors and self-reflection extended into the room.

Highlights include location, rooftop cocktails and dinner (grilled octopus, signature cocktails, vodka martinis), cappuccino in the lobby, and being a mile away from LA’s prestigious museums including the Academy Museum, LACMA, Peterson Museum, The Paley Center for Media, MOCA, Leica Gallery, and the Museum of Tolerance. It’s also incredibly important to emphasize how easy it is to order Doordash. I was beyond thrilled to return to my favorite global cuisine, Ethiopian. Being so close to the Fairfax district means this exceptionally flavorful cuisine located in the Ethiopian District is a hop, skip, and a jump away from the hotel. I ordered from a newly opened local vegan Ethiopian restaurant called Rahel Ethiopian Vegan Cuisine and it was divine.

The past two years have given us an opportunity to explore a new array of vehicles from American made car manufacturers, opening our eyes to the innovation and technological advances the automotive industry is moving in. This time around we drove the illustrious 2021 GMC Yukon 4WD AT4. This vehicle is sleek, sexy as hell, and in spite of being a larger SUV, the stabilitrak and magnetic ride control are the features that makes it one very smooth drive (even in heavy rain).

Some of the features that come standard on this model are its 9-speaker Bose audio system, following distance indicator (so when you get that LA impatience, it reminds you to back off), all-terrain wheels, heated steering wheel, and a third row split bench, power fold among many other perks. The model we drove had some extras such as the dual-panoramic sunroof (which the kids loved), retractable assist steps with perimeter lighting (ideal for the vertically challenged), enhanced cooling radiator (life saver in heavy traffic), high def surround vision, GMC’s signature infotainment system, rear seat media system, heated bucket seats in the back, and air ride adaptive suspension. We drove all over LA and whether we were on rough roads, hugging a tight canyon, or braving the freeways, this was one hell of a nice vehicle to drive (and was difficult to give back!).

MSRP with all the bells and whistles on this model is $75k. And while we can’t boast about gas efficiency, this is a luxury SUV if ever there was one. The two-toned stitching on the seats alone is streamlined and gorgeous, but when you get behind the wheel, pair your phone and turn on the Bose audio, you feel like you’ve escaped into something exquisite. (gmc.com)

For those of us born in LA, we have an undeniable attachment to this city. From the way art is celebrated to the way film or culinary curiosities are fed, Los Angeles is a special place. Growing up here, I have to admit that no matter how far I travel to any stretch of the world, I always appreciate coming back to the extraordinary spirit of creativity and chaos that lives in breaths in every pocket of the city (county). While we can’t stop Omnicron from transforming into more warped versions of itself or understand its origin story, we can embrace that if we’re safe and thoughtful, the city is begging us to explore it.

And we highly encourage it.