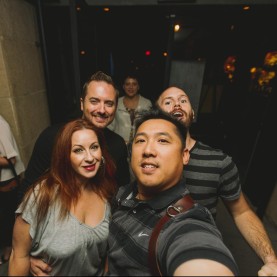 Sarah’s voice drips out into the microphone like honey, sweetening the deliciously dark lyrics of “Kiss the Cuts (Disco No. 6 for Charles Bukowski) as Jazzmin, Andrew and Anders moved in sequence with the pulse. Once the clapping quiets, Sarah announces that “Kiss the Cuts” and the tongue-in-cheek song “I’m Nobody’s Baby (& You Ain’t Nobody’s Fool)” are available to purchase on their official “double”, of which I highly recommend. That way, their finger snapping and toe tapping tunes can follow you home in entirety, instead of just a catchy chorus looping in your head.

After a long week of event planning and coordinating, Dawn and I decided we needed a fun “ladies night out” as a reward for our hard work. Two of our favorite magic men, Chris Korn and Ben Seidman, were scheduled to perform at The Magic Castle, and since Dawn and I had only seen their magic briefly in the studio during their ATOD Radio appearances, and on the Travel Channel’s “Magic Outlaws”, we decided this would be the perfect opportunity to pay them a visit.

As I breach the intersection where “blvd.” meets “way”, I notice an adjacent baseball field where middle school adolescents play a game next to fenced off basketball courts and children playing tag. It is memorable to me because the rays of sunlight peeking through the chain links surrounding the field cause me to raise a hand in order to see. But the sun soon goes down, and soon I no longer need to shield my eyes. Just in time, too – a crowd is beginning to form outside one of the Elephant Stage’s five doors I had mistaken for a restroom entrance earlier in the evening.

Its another fabulous Fashion Report, and today at Team ALD we are discussing the bright lipstick trend. We love it, and so does our guest blogger, Racquel! Tell her what you think, and tweet @RacquelGrant with the tag #ATODMagz @atasteofdawn

The dirt rose up around us like steam as we tread through rows of cars with painted windows. The afternoon sun was beating down on our exposed shoulders, but an occasional breeze helped to soothe them from the 97 degree heat, carrying the distant scent of coconut sunscreen, hot grass, and smoke. The mile walk from the day parking lot to the front gates was punctuated by three security checkpoints, passing by fenced off car-camping sites and shuttle bus drop off areas. We had to empty out our water bottles prior to entering, but were informed of the multiple free water refill stations located throughout the grounds, as well as new bottles only costing $2. Also, if you brought 10 empty water bottles to the recycling booth, they would give you a new, cold bottle for free.

On opening night, April 27, The North Plan suddenly became the highlight of my year. The night was chilly, but it did not cool down the fire that erupted inside The Elephant Theatre. The cozy, comfortable stage allowed the audience to get close to the actors and feel the play and experience a night full of laughter and thought.

Brights and Hues of Gray – Weekly…

Continuing the Coachella love, it’s #TrendsTues! We talked about the MEN for #MANicMonday, now @team_ALD member Jenifer and I talk about what the girls will be wearing for round two this coming weekend! Neon, prints, cropped tops, high shorts, and more.

If you want to save millions of dollars, odds are, you have to save it a little at a time. Every week, every month, and every year you have to put some money aside. Over time, your savings grows and after 20-30 years of consistent effort, your savings is larger than you’ve ever imagined.

To further honor his commitment to music and community, Pato was inducted into the Reggae Hall of Fame alongside UB40 and Steel Pulse in 2002. Despite all the achievements, Pato “constantly searches for the truth.” That search for truth led him to the Urantia Book. That is not to say that Pato was not a spiritual person prior to the Urantia Book, but the Urantia Book changed his life because he feels he has found the truth he seeks within the book. His spirituality reveals itself with each answer. And Pato does not hold back from answering any question posed to him…

For #MANic Monday, we focused on classic accessories that every man should know how to incorporate into his style. But why should guys get to have all the fun when everybody knows that diamonds are a girl’s best friend! And in honor of bling, our team collaborated on accessories for this season that they just cannot live without. From kicks to cuffs, we have assembled an array of accessories which are sure to transform the genre of your favorite ensemble into a fresh and funky look.

Enchanted by The Magic Castle Reviewed by…

Fashion Stylist, Ali Levine of Ali Levine Design gives us the lowdown on Runway Fashion at this year’s 2013 Grammy Awards.